Abstract- In 1909, accepting the Nobel Prize for Physics for “contributions to the development of wireless telegraphy”, Karl Ferdinand Braun stated “It had always seemed most desirable to me to transmit the waves, in the main, in one direction only.” He also presented a schematic of a three-antenna system that can form a desired beam in one direction. In the following decades, this simple scheme was advanced to large-scaled phased arrays used for military radars in WWII and beyond. In 1965, Gordon Moore predicted that advancement in integrated circuit technology will enable monolithic microwave phased arrays that can revolutionize radar. Nearly four decades later, monolithic microwave silicon phased arrays were reported for the first time. Today, monolithic radio frequency, microwave, and millimeter wave phased arrays are turning mainstream in commercial products including automotive radars and high speed wireless transceivers. Shortly following the invention of laser in 1960, electronically-steerable laser beam was conceived to be useful in optical radars (nowadays known as lidars), free-space optical communications with moving transmitter and/or receiver, and projection television. While optical beam steering has been around for several decades, monolithic optical phased arrays are more recent thanks to advancements in fabrication technology. Monolithic optical phased arrays may be applicable in compact commercial devices for imaging, ranging, sensing, display, and holography. This talk will cover the basics, history, and applications of phased arrays followed by state-of-the-art realizations from radio frequencies up to optical frequencies. 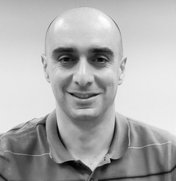 Bio- Hossein is a Professor of Electrical Engineering, Ming Hsieh Faculty Fellow, and the co-director of the Ming Hsieh Institute and the Ultimate Radio Laboratory (UltRa-Lab) at the University of Southern California. His research interests include analog, mixed-signal, and radio-frequency integrated circuits; photonic integrated circuits; electro-optical integrated systems; and implantable integrated solutions. He received the B.S. and M.S. degrees in Electronics Engineering from the Sharif University of Technology, Tehran, Iran, in 1997 and 1999, respectively, and the M.S. and Ph.D. degrees in Electrical Engineering from the California Institute of Technology, Pasadena, in 2001 and 2003, respectively. Hossein is an Associate Editor for the IEEE Journal of Solid state Circuits (2013 – present). He was a Distinguished Lecturer for the IEEE Solid-State Circuits Society (2013 – 2014); member of the Technical Program Committee of IEEE International Solid-State Circuits Conference (ISSCC) (2011 – 2015), IEEE Radio Frequency Integrated Circuits (RFIC) Symposium (2011 – present), and the IEEE Compound Semiconductor Integrated Circuits Symposium (CSICS) (2010 – 2014); an Associate Editor for the IEEE Transactions on Circuits and Systems—Part I: Regular Papers (2006–2007) and the IEEE Transactions on Circuits and Systems—Part II: Express Briefs (2004–2005); and Guest Editor for the IEEE Journal of Solid state Circuits (Oct 2013 & Dec 2013). He was the recipient of the 2015 IEEE Microwave Theory and Techniques Society (MTT-S) Outstanding Young Engineer Award, 2008 Defense Advanced Research Projects Agency (DARPA) Young Faculty Award, and a National Science Foundation (NSF) CAREER Award. He received the USC Viterbi School of Engineering Junior Faculty Research Award in 2008, and was recognized as a Distinguished Scholar for the Outstanding Achievement in Advancement of Engineering by the Association of Professors and Scholars of Iranian Heritage in 2011. He was a co-recipient of the 2004 IEEE Journal of Solid-State Circuits Best Paper Award for “A Fully-Integrated 24 GHz 8-Element Phased-Array Receiver in Silicon” and the 2007 IEEE International Solid-State Circuits Conference (ISSCC) Lewis Winner Award for Outstanding Paper for “A Fully Integrated 24 GHz 4-Channel Phased-Array Transceiver in 0.13um CMOS based on a Variable Phase Ring Oscillator and PLL Architecture”. He is the co-editor of the book “Millimeter-Wave Silicon Technology: 60 GHz and Beyond” published by Springer in 2008, and “mm-Wave Silicon Power Amplifiers and Transmitters” published by the Cambridge University Press in 2015.

The event recording can be viewed here.